54 Traditions Gallery is the only gallery in Vietnam focusing on the antiques, artifacts and art of Vietnam’s 53 minority groups and the Kinh majority people. We have over 1000 objects on display and objects from our collection have been exhibited in museums in Hanoi.

We focus on the cultures of Viet Nam’s 53 minority peoples-the things they make and the things they use.
What we offer can be called antiques, art, or material culture. We have a room dedicated to each of the following categories: The Central Highlands, Tribal Textiles, The Shamanic Tradition, Functional Objects and Water Puppets, Older Things.

Our approach is “anthropological”- we believe that the value and appreciation of an object is increased when we know what it is , when and why it was made and who made it, who used it, why it looks the way it does.
We also offer select objects from the Viets (the Kinh), the majority culture of Viet Nam, including objects from the recent past and also from the distant past.

THE HIGHEST OF STANDARDS

We select excellent examples (both major and minor) and then clean, prepare, and mount or frame each object as a museum would. 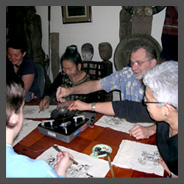 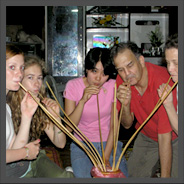 Cultural Activities – “The Mountains in the City”

We provide written documentation of the identification, age, purpose, iconography (if relevant) and background of each object (usually from 500 to 1000 words).

We augment our own expertise and that of published works on the subject and, for complex matters, with consultation with recognized experts, both within Viet Nam and outside.

These include Jess Pourret, author of the comprehensive “The Yao” and the scholar Pham Ngoc Khue, author of numerous works on shamanism, shamanic paintings, and other aspects of tribal cultures. (Full list is available on request).

ALL OF OUR OBJECTS ARE

Born in Hanoi in 1978, Nhung attended the Hanoi University of Foreign Language Studies, majoring in French. After graduation in 2000, she began work for a French company for 6 months and then as a salesperson in a shop selling the material culture of Vietnam’s ethnic minorities. After 4 months, she opened her own shop, and soon opened a second shop. Much of her success was in the cultivating of excellent sources, especially in the northern and far northwestern sections of the country. She made frequent collecting trips to villages and the homes of people (both minority and Kinh) in isolated areas to do research and develop relationships.

Over time, her “eye” became one of the best in Hanoi, discerning the most extraordinary of the ordinary objects. In addition, she developed an expertise in the antiquities (of stone, clay, and bronze) encountered by rural people as they tilled new land and worked their fields. She emerged as the most important source of objects for Mark Rapoport as he built his very large collection of tribal objects. In August of 2004, she closed her shop and joined forces with Mark to found a company to present the tribal and antique objects in a sophisticated way, emphasizing the individual significance of each piece by: preparing and presenting the objects to the highest standards, and preparing an educational component for every piece.

Mark was born and raised in and around New York City. With the exception of eight years in Boston for his education, he lived in Manhattan for his entire life until moving to Hanoi.

As a medical student in 1969, he came to Viet Nam for two months as a volunteer medical worker. Although most of his work was in the hospital for Vietnamese civilians in Danang, he did some work in the villages of the ethnic minorities in Quang Nam and Quang Ngai provinces. At this time, he acquired an interest in the material culture/art of those groups. The next year, he worked in Nigeria at the end of their civil war, and in the course of his time there acquired an interest in African art.

Over the next 25 years, he acquired a large collection, mostly of African objects. He has donated and sold thousands of pieces to individuals and institutions, including: Metropolitan Museum of Art in New York; the Brooklyn Museum of Art, the Mingei International Museum in California, and the New Jersey Center for the Performing Arts, and hundreds of pieces to the collections of Harvard, Boston, Yale and Brown Universities.

In 2001, Mark’s family moved to Hanoi. In the last 4 years, Mark has had put together a large collection of material culture and art from the 54 ethnic minorities in Vietnam, with an emphasis on the groups residing in the mountains north of Hanoi and those in the Central Highlands area. The Hanoi Museum of Ethnology mounted an exhibit of some 230 of Mark’s objects in 2002, its first-ever exhibition devoted to an individual collection.